skip to main | skip to sidebar

The recent deluge of hurricane coverage and forecasting has left my boys curiously fascinated.


We don’t have cable television in our home so the car radio has become a source for disasters both political and environmental. Under normal circumstances, our morning car rides to school allow me to perform my best work as a deejay; I queue up songs for the boys, they make requests, and we dance and drive – a skill I have perfected over the years (just ask any passenger who’s had the pleasure of riding shotgun next to me).


Lately though, we have opted for the nice NPR newscasters to accompany us on our rides. The radio news has always intrigued me. When I was little, I used to think there was a tiny man living in the car radio system. His microphone was miniscule but his topics were big and interesting to my mom. As I watch the boys in my rear-view mirror, I wonder how they imagine the broadcast.  As they listen with intent and determination, I see one of my boys hanging on every word the newscaster shares. His eyes are wide open and squinty all at once. The other one sprinkles several follow up questions here and there for the duration of our drive: “Do Tsunamis happen in New Jersey? What was the worst hurricane you ever saw? What happens to horses in hurricanes?” Mostly, I bullshit my answers but during my finer parenting moments I simply say, “I’m not so sure. Let’s ask Pop when we get home.”


And sure enough, the minute we sit down to eat, the boys begin their barrage of questions. Watching my Dad answer them turns into a spectator sport for me. The boys lob some doozies at him yet he deflects, defends, and describes with great ease and agility. They listen to stories of Sandy swirl around the dinner table as my parents share their memories. I try to interject from time to time but my mind’s eye travels back to a damp and chilly November. Like the storm we suffered, I sink back into darkness and stillness.


I hate that I’m about to quote Dickens right now but I can’t find better words – perhaps one day.


“It was the best of times - it was the worst of times.” [The weird thing about that quote: After Todd died, I was perusing one of our bookshelves. My fingers landed on Great Expectations. I was compelled to pick it up. Todd asked me once for a list of books I felt he should absolutely read before he died. Now – to be fair, he asked me the question when death wasn’t really on the table. (Had he asked me that question when death was at the door, I think my list would have differed slightly...) Anyway, I picked it up and found a boarding pass disguised as a bookmark in the middle of the book. Now – this is the kind of shit people tell you after someone dies and you’re like, “C’mon. Did that really happen?” The boarding pass/bookmark was like a little fountain of information: miles accrued, seat number, gate number, boarding time, and most strikingly – the date. I have no idea what year the flight was – I’ll have to dig deeper. But at some point, Todd took a flight to Santa Ana on January 27th. I don’t mind January 27ths. The four January 27ths I have encountered since Todd died have collectively become my permanently penultimate day with him.] 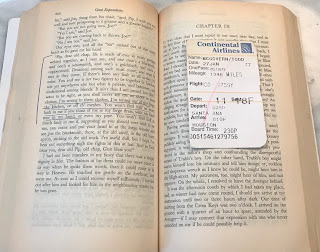 In the background, the conversation in the kitchen is still on Sandy. I’m not in my parents’ kitchen with the boys though. I’m fading in and out of their house as I find myself in my bedroom putting the final hurricane preparations in place. The wind doesn’t seem as bad with Sandy as it did with Hurricane Irene but I make a half ass attempt to protect our house nonetheless. I jerry rigged the doors facing the ocean with bungee cords and moved the furniture off our front porch. That’s all I could do. I was still nursing the boys and Todd just started hospice. He was already sleeping downstairs in our makeshift hospital room. My life was propelled by a polarity which I could direct simply by walking upstairs or downstairs in our home. Upstairs, the boys were sleeping soundly in their room. Their carpet, soft and cozy, was a lovely blue color; it reminded me of the ocean. Downstairs, Todd was sleeping a different kind of sleep. His narrow bed was guarded with metal rails making it difficult to fall out or get in. The rails were always cold to the touch and I had to wrap socks and baby blankets around them to make them more user-friendly.


We woke up the next morning and discovered that Sandy spared our home and town but she left us without power for a long stretch of time. The weeks following Sandy were some of the greyest days on record yet I still felt warmth and happiness interspersed quite often. The boys were 5 months old and illuminated everything they touched. They were trying solid foods, they were smiling…they were communicating! I hated leaving the boys each morning for work although we had a pretty good system in place. I would leave the house in darkness around 5:30am as soon as Todd’s parents arrived to cover the daytime hospice shift. I drove north on Ocean Avenue for 9.7 miles to the ferry. The sun began to rise the further north I drove and the quiet dawn revealed Sandy’s wreckage on my route. It littered both sides of Ocean Avenue - bathtubs, flooded and abandoned cars, and debris everywhere.


Glazed eyes and groggy mind, I parked my car and boarded the ferry. Disembarked in New York City, I began my 25-minute walk to work. I made a playlist at the time which I titled “Walking Mellow.” (It should have been titled “Jesus Fucking Christ: These Songs are so Depressing.”) The one terribly gloomy song that cheered me up was from “Les Misérables.” I would listen to Anne Hathaway’s version of “I Dreamed a Dream” and think to myself: Well, shit. At least I’m not a French prostitute living in revolutionary France who lost her daughter and is forced to sell her hair….


Once at work it was all bright things and fancy jewelry. I enjoyed working but missed the boys and Todd. They seemed so far away. It was only a two-hour commute (door to door) each way, but the distance seemed much further. It’s hard for a new mom to return to work after the honeymoon-maternity -leave phase. And it’s really fucking hard to simultaneously tell your husband he must start hospice. Of all the things I regret in life, my biggest regret is that I didn’t have the wherewithal to tell the doctors, “Hey pals - If you want to put Todd on hospice, you tell him…” But, I told him and I don’t think he ever forgave the messenger.


I plodded through my day until it was time to walk to the ferry and commence my commute home from cold, grey New York. By the time I got off the ferry and began my drive down Ocean Ave., the sky was pitch black and softly held a “winter in a beach town” vibe. It was beautiful and it hid the wreckage with exception to the bathtubs. The bathtubs were the strangest and most striking to me. Their white porcelain finish glowing in the moonlight made them prettier and more visible than everything else. Eventually, they would become my beacons each morning and night as the days got longer and darker; I counted them to pass the time on my drives home. I tallied five tubs in total one night in December…


Finally, I’d walk up our path and into our home. My jacket still on, I checked on Todd and talked to his nurses for a few minutes. I’d then head upstairs to kiss the boys and watch them sleep for a little bit. Once in my pajamas and out of my jacket, I’d head back downstairs and curl up onto Todd’s hospital bed that was now occupying our living room. I had to keep the baby monitor under his pillow in case the boys woke up.  But, they slept. We slept. We were all tired, I guess.


Although I’d like to be stuck in November for a little while longer, I am wearing flip flops and the boys are directing their animated attention at me since my dad must have left the table. “Mama, don’t worry. We can make a great fort if we have a hurricane. And, Pop knows EVERYTHING about hurricanes. Plus, our house isn’t made out of straw so we will be fine, right Mama? Right, Mama?” And just like that it’s September and sunny and warm again. “Right boys – we will be fine.”
Posted by seasitcancer at 12:17 PM No comments:

seasitcancer
New York, NY, United States
Amanda and I are experts at living with cancer. As a young couple, cancer has been the third wheel in our entire marriage (except during the two weeks of our honeymoon). For the past six years, cancer has been a part of every decision that we make as a couple and as individuals. Since my initial Stage IV Colorectal Cancer diagnosis in 2004, we have faced devastating setbacks, defeated challenging obstacles, and shared powerful victories. Although cancer is omnipresent in our marriage and in our lives, it has failed to control us. This blog is about a Stage IV cancer patient and caregiver who have chosen to “Seas It” and live a little each day.